The image below was taken on West Main Street, west of Columbus in Medford. The bike lane is roughly two and one-half feet wide  (measured from the outside edge of the gutter to the center of the lane stripe). Each mark on the measuring stick is equal to one foot. 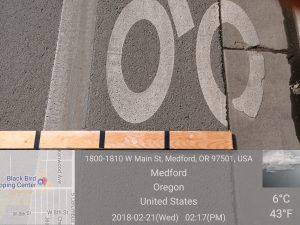 With bike lanes like these, it is no wonder that only  six percent of the roughly 1,000 Medford residents who were surveyed, as a part of the City’s Transportation Plan Update, said “I am confident and secure with riding my bicycle on the streets and have few concerns about safety.” I’ll bet that those City residents don’t ride on West Main. The entirety of the Transportation System Plan Update, Community Survey is available HERE.