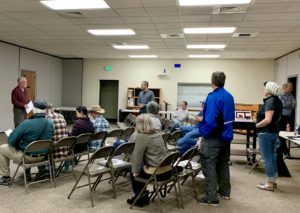 We had a great meeting Thu 11/21 @6:30pm at the Ascension Lutheran Church in Medford, with 15 people attending.   There were two new members who introduced themselves. The verbal feedback was that the meeting was very good and people appreciated having a meeting.  We had a very interesting presentation on the Greenway from John Vial and Steve Lambert from Jackson County Parks dept.  Thanks to Joanne Mitani and Bob MacCracken for greeting people, and thanks to Lan Roberts for providing refreshments.   Two members offered to be greeters and one to provide refreshments at future meetings.

We had a very interesting presentation on the Greenway from John Vial and Steve Lambert of Jackson County Parks.  They covered the history of the Greenway, maintenance activities (especially root surges), and cleanup of transient camps.  Here’s a .pdf of the presentation. Steve also shared a video on Greenway cleanup – “Greenway Sweep Story“.

Harlan Bittner and John announced that SV will be partnering with Jackson County Parks to help mark hazards on the Greenway. Look for more news on this volunteer activity in the new year.

Highlights from the written feedback:

So I plan to schedule quarterly meetings at the same location and time going forward.

All in all, I think it was pretty successful meeting.  Thanks to those attending and especially to the greeters, refreshment provider, and for the help cleaning up.