I am still trying to get over this ride we did almost a month ago.  The plan was to do a 72 mile ride loop starting from Marty’s Cycles in Medford.  The route was to go out through White City, take Avenue G over to Table Rock Road, out Table Rock Road to Meadows Road and into the East Evans Creek Valley.  The return trip would take us down East Evans Creek from Wimer, North River Road from Rogue River to Gold Hill, and Old Stage into Jacksonville before returning to Medford via Pioneer, Dark Hollow, and South Stage Road.  It was a very brisk start at 10:30 when the temperature was at a cool 34 degrees.  We all had adequate clothing on for the ride though so it was pretty uneventful out through White City.  We traversed between the Table Rocks switching off turns in the lead as we went.  We had a pretty stable pace at 19-21 MPH and fortunately there wasn’t much wind.  We ride together as a group pretty regularly and we tried to not get to aggressive as we knew how many miles we had ahead of us.  It actually warmed slightly as we went up Meadows Road or at least it appeared to as we were working a little harder on the ascent.  We stopped at the top of Meadows for a short break before we descended into the East Evans Creek Valley.  It is usually cooler going through the canyon as we knew from experience.  As we dropped into the valley, I saw an ominous series of low clouds on the hills above us.  I pointed this out to several of the other.  Within 5 minutes, the rain started slowly but continued to increase as we rode toward Wimer.  The rooster tails we were throwing up all the way to Wimer ensured that we were soaked as well as having a mud strip up our faces upon our arrival.  We agreed to a quick restroom stop and then to get going before we got to cold.  My shoes by now were wet enough to enable me to feel my socks squish around inside and I could ring water out of my gloves.  The rest of my clothes were equally drenched.  Misery loves company so I was glad to see my compatriots were suffering the same fate as me.  I wanted to get some of the miles left out of the way sooner so when it was my turn on the front, I took a long pull and put the hammer down.  We were finally almost to Rogue River when I came off the front and let someone else suffer.  I did now though have to eat some extra water now that I wasn’t on the front of the pack.  I knew we had a little over 20 miles left to go once we got to Rogue River.  To totally flounder our spirits, a semi truck and trailer passed us just before our arrival in Rogue River and completely drenched us.  Fortunately, smarter and literally cooler heads prevailed when Bill ask if we could stop to warm up a little.  Thank goodness flashed through my head at this as I couldn’t feel my fingers from the second knuckle down.  Bill said both of his hands were so cold that he couldn’t operate his brakes or his electronic shifters. The temperature was by now hovering at 38 degrees and it was a great time to be totally soaked.  We stopped at the Chevron station in downtown Rogue River to warm up and to get some coffee. We must have looked like a motely crew as we stood inside near the coffee machine.  We were mud splattered all over our body and faces as we stood dripping inside trying to drink our coffee.  I was so cold after being inside over 10 minutes that I still couldn’t hold my coffee.  I was shivering so hard that each time I picked up my cup, I would slop hot coffee over my hands.  The rain still hadn’t let up any so we debated our dilemma for a little more.  Again, saner minds prevailed.  We decided to use the infamous wife card, call for a pickup and opt not to do the rest of the miles.  Our wives came with large trucks to rescue us from our own self inflicted pain. I can honestly say that this will be a birthday to remember for Bill.  I am sure he looks forward to many more birthdays but with much more warmth and a whole lot less rain. 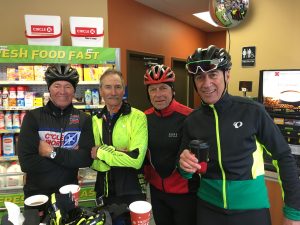