View Route on Ride With GPS 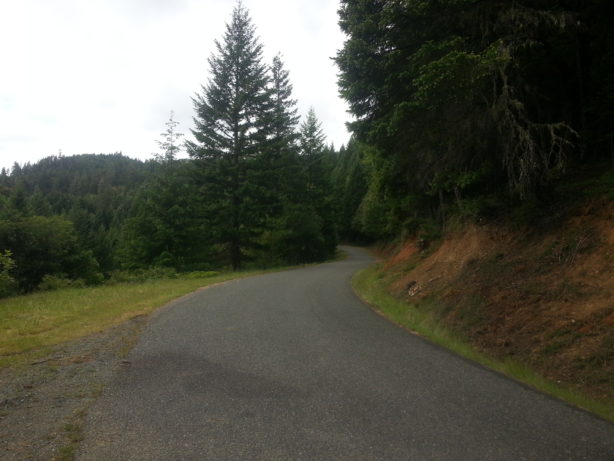 Experienced cyclists who've exhausted all of the possible rides and loops in the Medford/Ashland area may not be aware of this very challening loop south of Grants Pass. Like the Conde Creek Loop in the Cascades, this ride through the Siskiyous is a mostly flat/rolling ride interrupted with a massive climb. Like Conde Creek, the heart of the ride is a single lane, chipsealed BLM road that climbs a whole lot in a short distance. It climbs from 1800 feet to 4500 feet in 6 miles. That's an average grade of 8.5% — steep enough, but there is a mile of false flat in the middle that brings that grade down. When the road is going up, it is rarely less than double digits in grade. The climb in question is the poorly named Cedar Flats Road, which essentially crosses the divide between the Applegate River & Illinois River drainages. Cyclists willing to do the work are treated to spectacular views of both sides of the divide. Massive Greyback Mountain to the South seems to grow taller as you climb higher. As always, click on the map for a larger detailed view of the route.

The ride as mapped starts at the Provolt store at the intersection of the Jacksonville and Williams Highways. From here, continue on the Williams Hwy north to a left turn marked for Williams, the route to Cedar Flats can be a bit confusing, but there are no necessary turns. After about 10 miles meandering the valley, a sign marks the beginning of the Cedar Flats road which immediately turns left and starts climbing a 1/2 mile long 16% incline. The road levels out to a degree with steep stretches in the hairpins before summitting at 4500 feet and beginning the long descent along the S.Fork and Main Fork of Deer Creek. Follow Deer Creek Rd to the intersection of HWY 199 in Selma. Turn right, the highway gradually climbs 500 feet to a summit. Continue to the Wilderville exit and follow Fish Hatchery Rd which becomes Southside Rd before returning you to Williams Hwy. A right turn and 10 miles meandering along the Applegate River will bring you back to the starting point.

From Medford, follow Hwy 238 west 25 miles past Ruch through Applegate to Provolt.

Traffic is heavy on HWY 199 & on Williams highway but sparse elsewhere. Between Williams and the beginning of the climb, there may occasionally be pockets of traffic, but once you hit the Cedar Flats climb, traffic won't be much of an issue. Road quality will vary as well. The big roads are well maintained, but frequently are chipseal. The single lane climb is paved with very course gravel. The descent to Selma isn't as steep as the climb, but the descent is technical and there is frequently loose gravel in some places on the road.